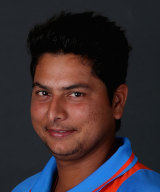 Kuldeep Yadav’s Profile: Kuldeep Yadav started as a fast bowler when he first joined a cricket academy in Kanpur, but was asked by his coach Kapil Pandey to switch to something much rarer - left-arm wristspin. The change wasn't smooth - Kuldeep admitted that he had even tried once - but he soon realised bowling left-arm wristspin was the way forward for him. And he was good at it too, having not only solid control over the length, but also a potent wrong'un among his variations.