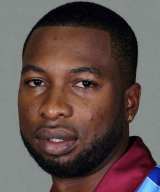 Kieron Pollard’s Profile: Kieron Pollard had a batting average of 11.30 from 15 ODIs and 17.20 from 10 T20Is when he became the joint-biggest buy at the IPL player auction in January 2010. Mumbai Indians weren't paying $750,000 (plus an undisclosed amount to break a tie with three other franchises) for Pollard's international record; they were shelling out all that money for the fearsome hitting power he had shown in domestic T20 action - most notably while smashing 54 off 18 balls for T&T against New South Wales during the 2009 Champions League T20.