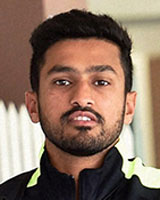 Karun Nair’s Profile: The year 2016 was memorable for Karun Nair. He made his ODI debut against Zimbabwe in July, his selection a reward for his consistency in domestic cricket - he had averaged more than 50 in his first three seasons. In October, he was elevated to captain of his state side, Karnataka. In November, he was given his first Test cap in the Mohali Test against England. In his third Test, he became India's second triple-centurion after Virender Sehwag, and only the third man in the game's history to convert a maiden Test ton into a triple.