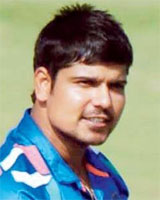 Karn Sharma’s Profile: After Praveen Kumar and Bhuvneshwar Kumar, legspinner Karn Sharma became the third cricketer to hit the headlines from the small western Uttar Pradesh town of Meerut when he bagged a Rs 3.75 crore from Sunrisers Hyderabad in the 2014 IPL auction. It was the highest amount earned by a domestic uncapped player in the auction, and was reward for a solid season with Sunrisers in 2013, when he grabbed 11 wickets in 13 matches at an economy rate of 6.60. He formed a potent combination with India legspinner Amit Mishra as Sunrisers beat expectations to reach the semi-finals in their first season.