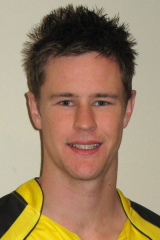 Jason Behrendorff’s Profile: A left-arm bowler with good pace and the ability to swing the ball, Jason Behrendorff was born in Sydney and raised in Canberra but has made his career with Western Australia since moving there during the 2009 off-season. He made his first-class debut in 2011-12 but his breakthrough season was 2013-14, when he finished second only to Steve O'Keefe on the Sheffield Shield wicket tally with 40 victims at 22.70. That season earned him a call-up to the Australia A squad for their four-day matches against South Africa in the 2014 winter. Away from cricket, Behrendorff has studied sports science at university and would like to work in the strength and conditioning department of a professional sports team after his cricket career.ESPNcricinfo staff