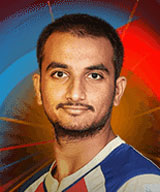 Harshal Patel’s Profile: A right-arm seamer with a big outswinger, Harshal Patel could have moved to the USA with his family, but he stayed on in India to pursue cricket at the insistence of his coach Tarak Trivedi. After taking 23 wickets at an impressive average of 11 in the 2008-09 Under-19 Vinoo Mankad Trophy, Harshal made his List-A debut for Gujarat in 2008-09. Harshal also played for India in the 2010 Under-19 World Cup in New Zealand and soon bagged an IPL contract with Mumbai Indians.