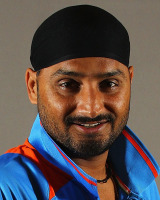 Harbhajan Singh’s Profile: A player of passion, with talent to match, Harbhajan Singh is India's most successful offspin bowler. Purists might mutter about a lack of loop and flight, but he is very much a product of his times where short boundaries, heavy bats and shorter forms afford little latitude to slow bowlers. Bowling with a windmilling, whiplash action, remodelled after he was reported for throwing, he deals by varying his length and his pace, and can turn it the other way too. His deadliest ball, however, is the one that climbs wickedly from a length, forcing a hurried jab. In March 2001, it proved too much for the all-conquering Australians, as Harbhajan collected 32 wickets in three Tests, including the first Test hat-trick by an Indian, while none of his team-mates managed more than three. His personal rivalry against the Australians has provided him both the highest and the lowest points of his career. Invariably, he has managed to raise his game against them, and been singularly responsible for Ricky Ponting's low scores on Indian soil - he dismissed him five times under 12 in the 2001 series - and some his punchiest batting performances has come against them too. But in 2008 his confrontation with Andrew Symonds created one of the ugliest controversies in cricket - he was initially charged with racial insult, which was reduced to abuse on appeal. Later that year, he was banned for whole IPL season for slapping Sreesanth, his Indian team-mate. When he channels his natural combativeness in the right direction, he can be a fiercely competitive and dangerous opponent. He was expected to be India's lead spinner in the all three forms of the game after Anil Kumble's retirement, but following a run of poor form was dropped from India's Test team for home series against West Indies and the tour of Australia in the 2011-12 season.