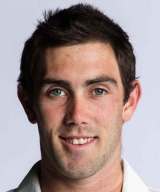 Glenn Maxwell’s Profile: One of the fastest scorers in world cricket, Glenn Maxwell has become a key man in Australia's middle order in the shorter formats. It is not just his power that worries opposing bowlers and captains. His ability to make unconventional shots appear routine - reverse sweeps and pulls, for example - makes it hard to set fields to cover all of his scoring areas. His audacity comes with risk, and he can exasperate as well as exhilarate, but at his best he can change a game in moments. In 2017-18 his career entered a confusing stage as he was dropped from the ODI side and then told by new Australia coach Justin Langer to "go and make hundreds" without seemingly being given the opportunities to do so. But he re-established himself is a pivotal member of the ODI and T20I sides playing some stunning innings on the tours of India and the UAE. He scored his third T20I century in Bangalore to help Australia mow down 194.