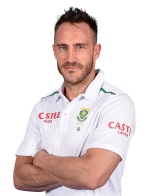 Faf du Plessis’s Profile: Classy, composed and a fine crafter of innings', Faf du Plessis emerged as one of South Africa's most consistent batsmen in the post-Jacques Kallis era. Du Plessis is strong on the front foot, has impeccable defences and enjoys spending time at the crease. A natural leader, du Plessis was put in charge of the T20 side in February 2013 and formed part of the senior core in other formats.