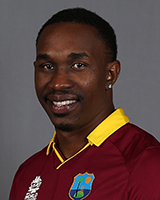 Dwayne Bravo’s Profile: Dwayne Bravo is that creature long needed by West Indies, an allrounder with plenty of flair and skill both as a batsman and seam bowler. Unfortunately for West Indies, they haven't been able to utilise his services as often as they probably would have liked to: till the end of 2013, more than nine years since his Test debut, he had played only 40 out of West Indies' 81 Tests in the same period. Prioritising IPL over international cricket has led to differences with the board, while injuries have also limited his Test appearances, but as a limited-overs player Bravo remains a key member for West Indies and took over from Darren Sammy as ODI captain in 2013. He held the post till December 2014, when the selectors replaced him with Jason Holder and left him out of the ODI side, two months after he had played a central role in the team pulling out mid-way from a tour to India due to issues with the payment structure in their revised contracts.