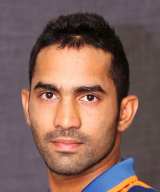 Dinesh Karthik’s Profile: Not many would forget the sight of Dinesh Karthik in India colours, horizontal on the ground, as he stumped Michael Vaughan in 2004. It was his first dismissal as a wicketkeeper for India, but his international career never really took off. Around the time he began churning out consistent runs in domestic cricket, India had MS Dhoni at the helm and behind the stumps, so there was very little Karthik could do. A man who was an integral part of a Test series victory over England in 2007, who showed he could open the batting in spicy conditions, just could not capitalise on his second chances.