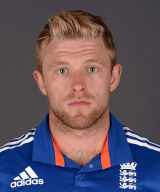 David Willey’s Profile: If there had been an English prototype for the perfect Twenty20 cricketer, it probably would have looked something like David Willey. Naturally competitive, willing to innovate, capable of changing a game with bat or ball, stunning run-out or implausible catch, he had much in his favour. That feisty approach, whether as a left-arm quick committed to attack or a clean-hitting left-handed batsman, first won him an international cap against Ireland in 2015 as part of an England side determined to adopt a more attacking philosophy after their flop in the World Cup in Australia and New Zealand.