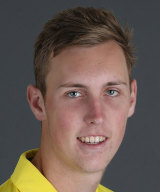 Billy Stanlake’s Profile: An extremely tall fast bowler at 204 centimetres, Billy Stanlake won a surprise call-up to Australia's ODI squad in January 2017 to play against Pakistan. Stanlake impressed selectors with his pace and bounce, having debuted in all formats at domestic level during the 2015-16 summer. However, back injuries have caused problems for Stanlake and at the time of his ODI selection had played only two first-class games and four List A matches, as well as seven BBL games.