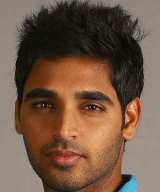 Bhuvneshwar Kumar’s Profile: Bhuvneshwar Kumar, like the other wily Kumar, Praveen, comes from Meerut, a northern Indian town known for - among other things - the industrial production of sports goods, most famously those under the brand SG. No wonder then that once thrown the new SG ball, Bhuvneshwar can make it hoop around corners, mostly back into the right-hand batsman but he gets it to hold its line often enough to be a genuine threat. Like the other Kumar, though, Bhuvneshwar operates at a middling pace of early 130s, but India weren't spoilt enough for choices to deny him an international debut season at the age of 22, in late 2012. Bhuvneshwar said a roaring hello to international cricket. In his first international over, he bowled Nasir Jamshed; with his first ODI delivery, he bowled Mohammad Hafeez; and in his first Test series he played a part in India's first whitewash of a four-Test series. Apart from the swing, Bhuvneshwar's control of it and his cricketing smartness stand out. It stood out the time when he, as a 19-year-old, worked Sachin Tendulkar over for his first first-class duck in Indian domestic cricket. The cricketing smartness showed with the bat too when he scored 128 batting at No. 8, winning a Duleep Trophy semi-final in 2012-13, just before his selection for India.