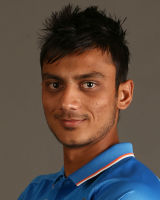 Axar Patel’s Profile: Axar Patel played just one first-class game in his debut season for Gujarat, but had a more successful showing in 2013. Slotted primarily as a bowling allrounder, the left-arm spinner got his first IPL contract with Mumbai Indians ahead of IPL 2013, although he was on the bench for the entire season. He was one of the key contributors to India Under-23s' title win in the ACC Emerging Teams Cup 2013, with seven wickets, including a four-for in the semi-final against UAE. A handy lower-order batsman, he was one of the consistent performers for Gujarat in the 2013-14 Ranji Trophy, finishing the season with 369 runs at an average of 46.12 and 29 wickets at 23.58. In early 2014, he was named the BCCI Under-19 cricketer of the year for the 2012-13 season. After an impressive season with Kings XI Punjab in IPL 2014 - 16 wickets at an economy rate of 6.22 - Axar was rewarded with a place in the Indian ODI squad for the tour to Bangladesh.ESPNcricinfo staff