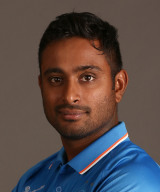 Ambati Rayudu’s Profile: From the promise of a teenage prodigy to clashes with the authorities to finding redemption, Ambati Rayudu's career has witnessed several twists and turns. A pint-sized, fluent strokemaker, Rayudu, at 16, was touted as India's next great batting hope when he blazed an unbeaten 177 while opening the batting, to help India Under-19s complete a clean sweep of a one-day series in England in 2002. The Ranji Trophy season that followed was also exceptional - including a double-century and a hundred for Hyderabad in the same match against Andhra.