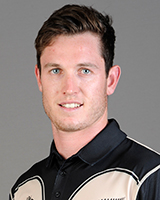 Adam Milne’s Profile: A lanky right-arm fast bowler, Adam Milne made a dream first-class debut as an 18-year-old in the 2009-10 season, taking a wicket with his second ball and finishing with 4 for 52 against Canterbury. The call-up only came because Michael Mason was called up to the New Zealand team due to Jacob Oram's injury. Milne was included in Central District's Twenty20 squad for the Champions League 2010 even though he didn't play a single game for them in the domestic HRV Cup. He played two matches in the tournament and impressed with his pace and was quickly touted as New Zealand's fastest bowler since Shane Bond. He was included in New Zealand's squad for their Twenty20 series against Pakistan in December 2010. The start was expensive and injuries disrupted his first-class career, before he returned to the headlines when picked in New Zealand's squad for the 2012 World Twenty20 in Sri Lanka. Knowing what a precious resource they had with his pace - he showed he could push the speed gun over 150kph - and continued problems with injuries, a very cautious approach was taken with Milne which limited his first-class exposure. From a considerable way out, New Zealand wanted him part of the 2015 World Cup squad and he duly slotted in as the third frontline quick before his tournament was ended by injury after the quarter-final.ESPNcricinfo staff