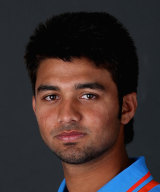 Ankush Bains’s Profile: An attacking opener who relies on instincts, Ankush Bains earned a first-class debut for Himachal Pradesh at the age of 17 on the back of consistent performances with the age-group teams. Two months later, he was part of the India squad for the 2014 Under-19 World Cup, where he scored two half-centuries in what was a disappointing campaign, with the team bowing out in the quarter-finals.